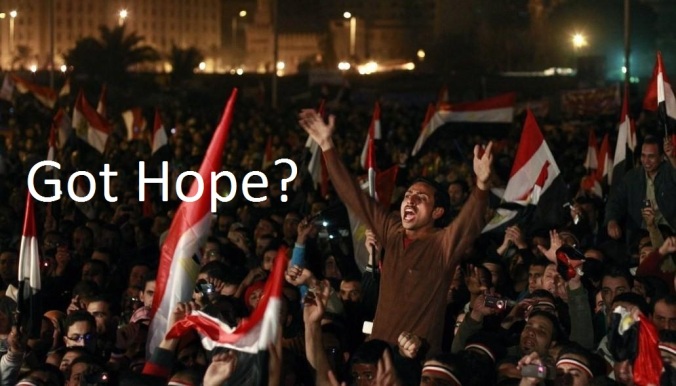 It seems clear at this point that 2011 will be remembered as an extraordinary year for political action, and maybe even for democracy.  Probably all of us were inspired by the Arab Spring, and perhaps most also by the ongoing struggles in Syria, Spain, Greece, the UK, Chile, and Portugal, to name a few.  We all hope for democracy rather than autocracy.  There is no question that the regimes in Tunisia, Egypt, Libya, and Syria were (or are) tyrannical, mendacious, and dehumanizing.  We know what we are against.  But what occupies me is whether we are clear yet about what we are for.  What is this democracy we all want?  I am worried that we think of democracy as something quite a lot less than it is—or has the potential to be.  I have been struck by how consistently U.S. officials, especially Obama and Clinton, have spoken in terms of a “transition to democracy” taking place in Egypt, Tunisia, and perhaps now Libya.  I think this idea of a transition is revealing because it shows the way democracy is dominantly conceived—it is thought of as a State governed by principles of liberal democracy.  When Obama and Clinton speak of a transition to democracy, they are expressing a desire that other places will become more like us, that they will cross out of their current turbulence and into the safe harbor of a democracy-like-ours.

But liberal democracy as it is practiced in the U.S. (and the UK, and Germany, and France, etc.) is an extremely impoverished form of democracy.  It prides itself on representative government, free elections, two parties, and the rule of law.  It is a system whereby a few elected representatives govern the mass of people.  It is in fact an oligarchy.  The few ruling the many.  What the Tunisians and Egyptians showed us this winter, what actually existed in Tunis, Tahrir Square, Pearl Square, and Dara’a, if only for a brief time, really was democracy.  The many ruling and speaking for themselves.  Their extraordinary acts showed us that democracy doesn’t have representative government.  It does not hold elections, and it does not have leaders.  There are no parties, no state, no laws, no corporations, no church.  It does not set aside a few to rule the many.  Democracy is disorderly, cacophonous, and kaleidoscopic.  It is a million different voices and as many demands.  It cannot stand still, or be formed up into governing institutions.  It does not take orders, it will not be dominated, and it cannot be killed.  It is the most powerful thing there is; it is also extremely fragile.  It is already here, inside all of us.  It is, as Douglas Lummis once wrote, the power of the people, all the people, gathered together in the public square, with no state or god standing over them.  Only the empty sky.

The apologists of liberal democracy, of democracy-like-ours, cry utopia.  If that’s democracy, they object, it is impossible.  But they’re wrong.  It isn’t impossible.  It’s just really scary.  Scary not to know what might happen when we take control again of our own lives, when we stand together in the square with no one taking care of us, no few to tell us many what to do.  Democracy is perfectly possible, because we’ve achieved it repeatedly throughout history.  Tahrir Square is only our most recent success.  But that success is threatened by this idea that Tahrir was somehow a proto-democracy, an immature outburst in need of an orderly transition, a growing-up so it can become stable, become a democracy-like-ours.  Rather it is our ‘democracy’ that is immature, that needs to grow up.  What we need, I think, is to come to understand ourselves as living in an oligarchy, as a many subject to the rule of a few.  Then we must undertake the hard work of growing up: of letting go of our need to be ruled and refusing the security of having someone else govern us.  If we really want democracy, if we are truly ready to learn what the Arab Spring has to teach us, we need to learn how to go to Tahrir Square, all of us together, over and over again.  It is scary, to be sure.  It is also very hard.  But it is probably our only hope.