In The Coming Community Agamben writes,

Common and proper, genus and individual are only two slopes dropping down from either side of the watershed of whatever (p. 20). 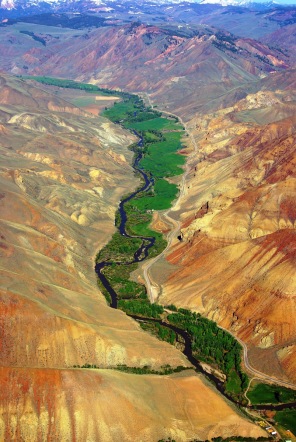 It seems he does not want to give either condition primacy, that he wants to refuse both 1) the idea that the common is merely an aggregate of the originary proper (or the community an aggregate of individuals), and 2) the idea that the proper is only extracted from of an originary common (or an individual just one example of a group).  Whatever being then becomes an idea in which he can locate a thing’s being-as-such, neither proper nor common, and as a result in each opposition–proper and common, owned and shared, individual and community–both terms flow from something else, from a more bare or original state of being.  Neither the proper nor the common is more basic, more original, rather:

The implication, I am speculating and perhaps rushing ahead too far to fast , is that neither communism nor capitalism is a more basic or truer form of social organization, that humans in their stripped-down, bare existence are both sharers and owners, members of a group and individuals, general and particular.  It is through action, or practice, or ethos that we work out and emphasize or suppress these modes of being, all of which we are entirely capable of.

I am still in the process of digesting this; any thoughts welcome…